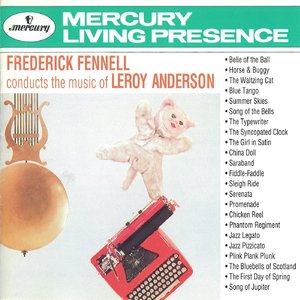 American composer Leroy Anderson was known for his lighthearted orchestral music; many of his most popular and famous pieces are included on this archival recording from the Eastman-Rochester "Pops" Orchestra and a British orchestra, both led by Frederick Fennell. The majority of these works were recorded in Rochester, New York in March 1958 and October 1956; the London session dates back to July 1964. All performances remain highly appreciated and illuminating.
Frederick Fennell Leroy Anderson Mercury Living Presence Eastman-Rochester Pops Orchestra Studio Masters
Details 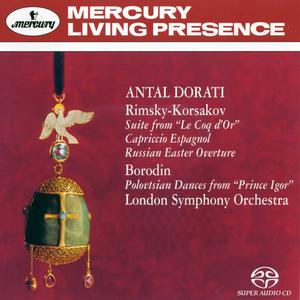 This SACD presents a new three-channel mix–something that was not offered by the disc’s original producer–of these 1956-59 Mercury Living Presence recordings. The two-channel version (also included on the disc) brings a noticeable improvement in clarity and presence over previous issues, as if a layer of gauze had been removed from the speakers, and it interestingly remains a more natural listening experience than the three-channel alternative. The primary concern however, remains the music, and Antal Dorati’s vibrant, colorful performances, with stunning playing from the London Symphony Orchestra (the sweetly swooning strings in Le Coq d’Or; the brazen brass in the Russian Easter Overture; the gorgeous woodwinds in the Polovtsian Dances) should be reason enough to purchase this disc.
Antal Dorati London Symphony Orchestra Mercury Living Presence SACD
Details 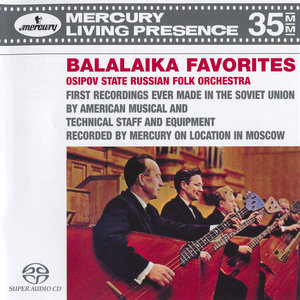